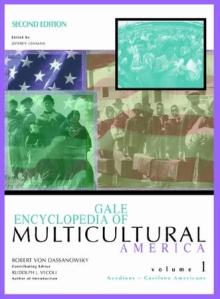 Plot Summary/Resource Description: As The United States diversifies more and more, the Gale Encyclopedia of Multicultural America, 2nd ed. (GEMA) provides important information about a variety of ethnic groups for “high school and college students, librarians, and general reference seekers alike,” (Preface).  Endorsed by the Ethnic and Multicultural Information Exchange Round Table of the American Library Association, the GEMA not only provides information about specific ethnic groups it also provides references so researchers can seek additional information.

The second edition of the Gale Encyclopedia of Multicultural America expands upon the first edition, which was published in 1995.  The GEMA provides entries covering 152 “ethnic, ethnoreligious, and Native American cultures currently residing in the United States,” (Preface).  Each entry includes a detailed essay about the group, written and edited by scholars in the field.  Each entry also includes a suggested reading list and a directory of information about that group, including email addresses and URLs for media, organizations and museums related to that group.

Groups are included in the encyclopedia based on either group population data from the 1990 census indicating a significant population or recommendation by the advisory board.  Some of the groups recommended by the advisory board are small, but the board felt that they were likely to be studied or researched by students, and hence warranted inclusion.  Essays include information about countries of origin, in the case of immigrant groups, but focus mainly on the group’s experiences in the United States.  In the case of Native Americans or “First Americans” the encyclopedia covers 18 ethnic groups, which is by no means comprehensive, but represents a six-entry increase from the 12 essays in the first edition.  In the preface the editors make a point to speak about the importance of Native American cultures to the United States.

Critical Evaluation: This is an important, valuable, and unique resource with well-researched and thorough information, so it would be quite useful to students researching, or even comparing, the experiences of, particular ethnic groups.  But, unfortunately, the GEMA is over ten years old.  Not being current does not render this resource useless, but since the data used is from the 1990 census that makes a lot of the data more than 20 years old, and, hence, likely inaccurate.  Much of the cultural information is still relevant, and the historical information remains accurate, but when one uses this resource it must be understood that some of the information lacks currency.   This encyclopedia is also available in three-volume book format, available in the library reference area.

Challenge Issues: There are no obvious challenge issues associated with this well-known and respected reference source.

Why is this book included? The Gale Encyclopedia of Multicultural America is a unique reference source that provides a wide breadth of information about America’s many ethnic and cultural groups.