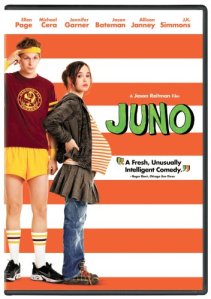 Plot Summary: Sixteen and pregnant, Juno MacGuff, has a lot to figure out.  First, she must tell her dad and stepmom the news; they are supportive.  She knows she is not ready to be a mother, so she has some decisions to make.  She discovers that she does not want to have an abortion.  The option she chooses?  Adoption.  She then sets out to find the perfect parents for her as yet unborn child.  She finds what she deems to be the ideal couple in Mark and Vanessa Loring and she begins to establish a somewhat awkward but honest relationship with them.  She is also not quite sure how she feels about the boy who fathered her baby, Paulie, who has been her close friend for years and has had a crush on her for a long time as well.  While she remains somewhat coolly distant from him, Paulie and many viewers suspect she feels more than she is willing to admit.

Critical Evaluation: Juno is a charming movie.  The dialog is witty, straightforward, and intelligent and the characters possess a truthfulness not always found in movies.  The storyline and the characters are compelling, making viewers care about what happens to the young protagonist and her friends and family.  The movie demonstrates that  a person does not have to be a grown up to become pregnant, but becoming pregnant, as least for Juno, can make a person grow up.  Her obvious caring about the life of her soon to be born child and her decisions around that demonstrate that her pregnancy forced her to grow up fast.  Her teen angst and insecurities demonstrate that she is not all grown up yet.  With its humor and warmth, to some extent, this movie romanticizes teen pregnancy, but the honesty and integrity of the movie as well as the fact that it is highly entertaining make it worth a watch.  “The film received four 2008 Academy Awards nominations: Best Original Screenplay, which Diablo Cody won, Best Picture, Best Director, and Best Actress for Ellen Page” (Juno, Wikipedia).

Reader’s/Viewer’s Annotation: When sixteen year old Juno MacGuff discovers she is pregnant she realizes she is not ready to be a mother, so she goes in search of the perfect parents for her as yet unborn baby.

Information about the Author/Director: When asked in an interview about his first reading of Diablo Cody’s Juno script, director Jason Reitman stated, “Page One and I was just like, it was instantaneous. I was like “Oh my god, this girl can write.” Then it just becomes a question of, “Well she can write, but is there a story here?” then about halfway through, by the time we got to the ultrasound scene, I was pretty confident that if I didn’t direct this movie I would regret it for the rest of my life [emphasis mine].” (Douglas, 2007).

Challenge Issues: Premarital sex, teen sex, sexuality, teen pregnancy.  In response to any challenges, one can refer to the library’s collection development policies.

Why is this film included? It is a great movie, and with its humor and honesty, I believe  it is destined to be a teen classic.