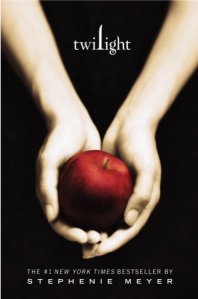 Plot Summary: Isabella “Bella” Swan has recently moved from sunny and dry Arizona, where she lived with her mother, to cloudy, moist, and often overcast Forks, Washington.  Bella loves the sun and, at first, feels overwhelmed by the darkness of Forks, but, eventually, she starts to get used to the climate and finds a welcome distraction in Edward Cullen.  Edward is from a somewhat unusual family of adopted teens, each one as strikingly beautiful as the next, but it is the beautiful and seemingly endlessly talented Edward who has caught Bella’s eye.  To say Edward makes Bella swoon would be an understatement and when at first his interactions with her seem to try to push her away she is confused, hurt, and disappointed.  But, then Edward seems to feel as intensely about Bella as she does about him and they touch.  That touch tells Bella there is something even more different about Edward than the fact that he seems like a boy genius in every school subject.  The touch tells Bella that Edward’s blood runs cold; he is a vampire.  And though this fact does not seem to bother Bella in the least, Edward has made it his life’s goal to protect Bella from himself and others of his kind.  Bella and Edward are drawn to each other in such a way that staying apart to keep Bella safe seems impossible.  But, is it possible?  Can their love survive the fact that they are creatures from different worlds?  Can Bella survive at all?

Critical Evaluation: Twilight is not your average fairy tale romance, nor is it Romeo and Juliet, though the book has things in common with both of these.  In many ways, Bella and Edwards really should not be together.  After all, vampires drink blood for sustenance, and even though Edward is of a family of more “civilized” vampires, who only kill animals to survive, his instincts are still to kill.  And though, as mentioned above, his primary goal is to keep his love Bella safe, he does not even always trust himself with her.  But Bella is very trusting, or, more accurately, her love and passion for Edward override her natural instincts to fear for her life.  The connection between Bella and Edward is magical and their feelings for each other are palpable through Meyer’s elaborate writing.  And even though, due to their circumstances, Bella and Edward’s physical relationship is explored less than in many teen novels, their romance is steamy and exciting.  A feminist reading of Twilight leaves a bit to be desired, but as far as engaging the reader and taking us on a journey to place where vampires attend school with mortals, this book is an exhilarating thrill ride.  Twilight was one of Publishers Weekly‘s “Best Children’s Books of 2005, one of School Library Journal’s “Best Books of 2005” and was number two (after Harry Potter and the Half-Blood Prince) on YALSA’s Teens’ Top Ten, “a ‘teen choice’ list, where teens nominate and choose their favorite books of the previous year!” (YALSA, 2006)

Reader’s Annotation: Bella Swan moves from her mother’s home in sunny Arizona to damp and overcast Forks, Washington where the climate difference takes a back seat to the beautiful and enthralling Edward Cullen.  But there is something different about Edward, and Bella is soon going to find out what it is.

Information about the Author: Stephenie Meyer’s inspiration for Twilight was a dream she had one evening.  She was a full-time mom at the time and had not done any writing in years, but she was compelled to eke out time in her day to write down the dream, and the next day to write more of what she imagined and then write even more the next day and the next.  Readers can basically read what Meyers dreamed; she says, “For what is essentially a transcript of my dream, please see Chapter 13 (‘Confessions’) of the book.” (Meyers, n.d., The Story Behind Twilight).

Curriculum Ties: Forbidden love stories, how does this compare?

Challenge Issues: Twilight was number five in the ALA’s 10 most frequently challenged books of 2009.  The reasons given were: “religious viewpoint, sexually explicit, unsuited to age group,” (ALA, 2009).

In response to any challenges, one can refer to the library’s collection development policies.  Also, there are several positive reviews of the book, and it has won several awards and honors, three are mentioned above.

Why is this book included? Because t

Because this book and the vampire novel craze, that the Twilight series inspired, are ubiquitous in teen literature today,  I felt the need to read at least one book in the series, in order to more fully serve young adults.

ALA. (2010). Top ten most frequently challenged books of 2009. Retrieved from http://www.ala.org/ala/issuesadvocacy/banned/frequentlychallenged/21stcenturychallenged/2009/index.cfm

Meyers, S. (n.d.) The story behind Twilight.  Retrieved from http://www.stepheniemeyer.com/twilight.html

Plot Summary: “My parents came from poor people who came from poor people who came from poor people, all the way back to the very first poor people.” Fourteen-year-old Arnold Spirit, Jr., called Junior by his friends and family, lives on the Spokane Indian Reservation. His best, and only, friend Rowdy protects him from kids on the “rez,” who use Junior as a punching bag. He is teased and picked on because he’s skinny, he wears glasses, he lisps, and, according to him, “Everyone on the rez calls me a retard about twice a day.” But, Junior is smart and thoughtful, he’s an aspiring cartoonist, and he has managed to eke out a small amount of hope for his future. He makes the life-changing decision to leave the rez school to attend Reardon, a school 22 miles from the reservation, with only white students in a wealthy, all-white town. Students at Reardon are high achievers, both academically and in athletics. Will Junior’s Indian community feel betrayed by his decision? Will the kids at his new school open their hearts to him? Readers will root for this unassuming, honest, witty and smart protagonist, as he makes his way through the murky waters of growing up and self-discovery.

Critical Evaluation: Alexie’s honest, authentic writing tells Junior’s story with intimacy and feeling.  And while this book reads like a memoir, it is fiction, but heavily based on Alexie’s own life.  Readers get the opportunity to be present for day-to-day life as well as some of the more dramatic moments of Junior’s life, and through it all Alexie’s dry wit and social commentary are meaningful and not at all didactic. The complex issues of race and class intersect, intertwine, and give readers plenty to think about.  Part devastatingly sad, part funny, and part hopeful, this coming of age story provides pause for thought about life’s complexities, as well as some of its most simple, and basic, pleasures.  Alexie’s is an important voice in young adult literature, as there are very few books depicting contemporary Indian Reservation life.  Though Junior is fourteen, the novel’s content is mature enough to keep older teens engaged.  In fact, the many levels of this book would likely be best understood by teens older than the main character.  While the content is often heavy, the writing is accessible for a wide range of reading levels; this book, with its many cartoon illustrations, is enjoyable to read, and could be a great choice for reluctant readers.  The Absolutely True Diary of a Part-Time Indian won the National Book Award

Reader’s Annotation: Junior’s life takes a dramatic turn when he decides to leave the Spokane Indian Reservation school for an all-white school in an affluent town 22 miles away from his reservation home.

Information about the Author: Sherman Alexie is an author, a poet, and a filmmaker.  He has written 22 books, and has received numerous honors for his creative works.  Alexie has a strong voice and does not shy away from controversy (see “Challenge Issues” below). He is a frequent public speaker and an advocate for Native American Youth.

Curriculum Ties: This book would provide plenty to talk about for a high school English or social studies class

Challenge Issues: This book contains a lot of cursing and references to sexuality.  It also exposes readers to poverty, racism, hatred, sadness and grief, things that some adults feel they need to protect young people from.  Alexie’s own experience of hearing from teens that this book speaks to them and they appreciate its honesty is discussed in his Wall Street Journal Blog piece, entitled Why the Best Kids’ Books Are Written in Blood.  More information about censorship of The Absolutely True Diary of a Part-Time Indian can be found in the Blog of The Office for Intellectual Freedom of the American Library Association.

Why is this book included? This book is included for several reasons.  1) Authentic American Indian voices are underrepresented in American literature in general, and in young adult literature in particular, so it is important that Alexie’s voice is heard and available for young people to read. 2) It is a great book, funny, poignant, and gives us all a lot to think about.  I enjoyed it a lot and think you will too.  3) Related to #2, it won the National Book Award among other honors and was highly critically acclaimed.